It was announced in December 2018 that Royal Air Maroc (RAM), the largest unaligned carrier in Africa, would become the 14th member of powerhouse airline alliance oneworld®. Some 14 months later, we finally have a date for when oneworld’s first full member from the African continent will join: March 31, 2020.

This is great news on so many fronts. First, there are the new destinations. The oneworld alliance, which currently includes American Airlines, British Airways, Cathay Pacific, Finnair, Iberia, Japan Airlines, LATAM, Malaysia Airlines, Qantas, Qatar Airways, Royal Jordanian, S7 Airlines, and SriLankan Airlines, already gets us a lot of places. But RAM has a network that currently connects to 94 destinations in 49 countries with a base in Casablanca, Morocco. Meaning, this partnership adds almost three dozen new destinations and 21 new countries accessible through the oneworld alliance.

Then there’s the prospect of redeeming miles for RAM flights using miles through current oneworld members. Members like American Airlines, which often sells miles on the cheap, and British Airways, whose distance-based Avios program presents excellent opportunities for short-distance redemptions. Lucky for us, RAM typically releases plenty of award seats on its flights, including business-class seats between its hub in Casablanca and its five North America destinations: Boston, Miami, Montreal, New York (JFK), and Washington Dulles. RAM operates Boeing 787s and 787-9s on its longer routes with great, fully flat business-class seats, so cashing in miles for these long-haul flights is often a good idea. 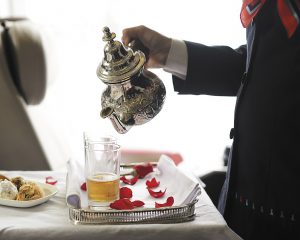 What’s more is that with RAM flights added to oneworld mileage award inventory, RAM segments shall be mixed and matched with other oneworld partners to reach desired destinations. For example, a single, one-way award flight from Charleston, South Carolina, to Tunis, Tunisia, will likely have a route of Charleston to JFK on American Airlines, JFK to Casablanca on RAM, and  Casablanca to Tunis on RAM’s subsidiary, Royal Air Maroc Express (which will also be part of oneworld, though as an affiliate member).

Finally, RAM’s membership in oneworld should also equate to great mileage earning opportunities. The airline is known for running great sales and generally offering affordable fares, so this presents a chance to rack up miles on oneworld carriers.

To top it off, RAM has a five-year plan to expand its fleet to carry over 13 million passengers a year (up from the current 7.3 million) across a global network to ultimately serve 121 destinations in 68 countries. That’s yet another 15 new destinations and nine more new countries reachable through the oneworld alliance–for a total of 1,084 destinations in 187 countries and territories. Basically, we’ll be able to get anywhere in the world using miles on oneworld airlines. Be still, our jet-setting, miles-saving hearts.

Survive Winter Snowstorms in Style with Your Premium Credit Card Thanks to Trip Delay...

Enroll in Global Entry on Arrival