It’s been more than a year since loyalty programs Marriott Rewards, The Ritz-Carlton Rewards, and SPG were integrated; and, sadly, we’ve seen nothing but changes for the worse.

When the programs were finally consolidated into a single loyalty program, Marriott Bonvoy, back in February 2019, we were told to brace for quite a few negative changes at the dawn of Bonvoy. Soon after, Marriott introduced an eighth category with a standard redemption rate of 85,000 points for 66 of its top properties, effectively increasing the price at these properties by a whopping 25,000 points per night. In addition, Marriott also announced other category changes in March 2019, shifting most properties to higher, pricier categories.

Well, the latest in Bonvoy’s blood bath is scheduled for September 14, 2019. This is the date when off-peak and peak pricing will be introduced with point redemption rates varying by season and times of the year (though remaining in a specified range). The off-peak and peak pricing will be determined by a computer algorithm factoring in demand. While Marriott claims that there will be an equal amount of off-peak and peak awards, we’ve seen similar dynamically priced loyalty programs work mainly against the consumer. Below are the prices we can expect. 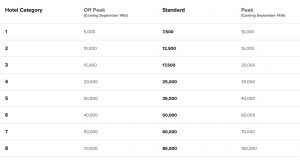 Other changes we’ll see on September 14 include new rules for points advances and a new cash + points chart with off-peak and peak pricing. Points advances will still facilitate the holding of rooms with points but will no longer lock in rates. (Read: If the number of points required for your room changes between reserving and paying, you’ll pay the new, higher price). The new cash + points chart will keep the cash amount steady within each category and vary the amount of points paid with off-peak, standard, and peak pricing. 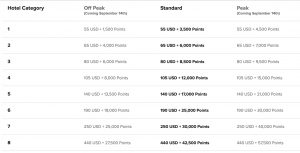 The one good thing—if there is one—is that Marriott has been transparent about all the changes being made to its loyalty program. That said, they never clued us in that Bonvoy would stand for “Bon Voyage” to the value of its points!

Another Blow from Marriott Bonvoy Coming with March 2020 Category Changes