The Platinum Card® from American Express just became a lot more valuable for those who frequent Philadelphia and Hong Kong airports.

This month, The Centurion Lounge arrives at PHL and HKG, with all the frills cardmembers have come to love from the Amex-branded lounges, from celebrity-chef-led dining presentations to mixology-driven cocktail menus. Additionally, Amex is busy constructing a new, larger space for The Centurion Lounge at the Dallas/Fort Worth International Airport, 3,000 square feet larger than its current location.

Here, what to look forward to at these new, state-of-the-art airport lounges and a brief recap on lounge access power of the American Express Platinum.

What’s the big deal about The Centurion Lounge network?

All premium credit cards offer some degree of access to airline-branded or third-party airport lounges, but American Express goes as far as having its own lounges. The Centurion Lounge network is the card’s signature, state-of-the-art lounge collection currently housed in nine airports worldwide (Dallas/Fort Worth, Hong Kong, Houston, Las Vegas, Miami, New York [LGA], Philadelphia, San Francisco, and Seattle). They feature contemporary furnishings, bespoke food and beverage programs by local celebrity chefs, craft cocktail menus, and sometimes an in-lounge Exhale spa, where guests can enjoy a complimentary 15-minute treatment. Overall, a far cry from the stale-pretzel snack dispensers, well cocktails, and cracked-leather seats we associate with many (but not all) airline-branded airport lounges.

The Centurion Lounge is complimentary for Platinum Card and Centurion cardmembers as well as two travel companions (additional guests will cost $50/each entry). Though American Express previously allowed entrance to Gold and Green cardmembers for a $50 fee, entrance is now exclusive to Platinum Card and Centurion Card members. Note that none of the American Express lounges places restrictions on which airline—or class—you fly.

What can I expect from The Centurion Lounge at Hong Kong International Airport?

The Centurion Lounge at Hong Kong International Airport (HKG) is located in the airport’s principal—and massive—terminal, Terminal 1. The 8,000-square-foot lounge, American Express’ first in Asia, has all the hallmark trappings associated with Centurion Lounges like cocktails curated by noted mixologist Jim Meehan and wine selections by wine authority Anthony Giglio, a computer bar, a private shower suite, stylish workspaces, and a full international spread at breakfast, lunch, and dinner (with the bonus of some local dishes such as dim sum baskets and chicken congee). Unlike its sister lounges, however, the celebrity chef cuisine is reserved exclusively for Centurion cardmembers. They can choose from an à la carte Cantonese menu designed by Michelin-star chef Lau Yiu Fai (think: crispy prawns with black truffles and baked egg tartlettes with bird’s nests). 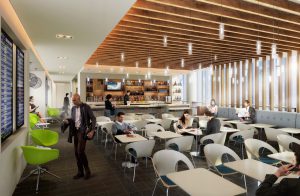 What can I expect from The Centurion Lounge at Philadelphia International Airport?

The Centurion Lounge at Philadelphia International Airport (PHL) is located in Terminal A West, which services American Airlines, British Airways, Lufthansa, Qatar, and Spirit Airlines. Thankfully, this terminal is connected to Terminal A East as well as Terminals B, C, D, and E post-security by a series of walkways. The 6,300-square-foot lounge features floor-to-ceiling glass windows with prime views of the runway action and sleek workspaces. Like other Centurion Lounges, mixologist Jim Meehan has curated the cocktail list and Anthony Giglio the wine selections. Four-time James Beard Award– winning Israeli chef Michael Solomonov has conceptualized the fabulous food menu, so look forward to the likes of challah French toast with tehina and blackberries for breakfast and Bulgarian kebabs with red pepper and white bean salad at dinner.

When will we see the new space of The Centurion Lounge at Dallas/Fort Worth International Airport?

The lounge is set to relocate in the first half of 2018. The new space is just across from the current space in American Airlines’ Terminal D (near D17), and the current space will not be disrupted during the construction of the new space. The move will bring an additional 3,000 square feet, a new telephone room, a private mother’s room, and an additional shower suite. The Exhale spa, cuisine by James Beard Award–winning chef Dean Fearing, and cocktails by Jim Meehan continue with the move.

If I don’t frequent an airport with a Centurion Lounge, does American Express provide lounge access at other airports?

Most definitely! The Centurion Lounge just happens to be the signature lounge program within the American Express Global Lounge Collection, which provides Platinum and Centurion cardmembers access to over 1,100 airport lounges worldwide. In addition to The Centurion Lounge network, American Express operates 10 other cardholder-exclusive International American Express lounges, which are well done but offer less frills than the Centurion Lounges. On top of that Platinum and Centurion cardmembers receive complimentary membership to the largest independent airport lounge access program in the world, Priority Pass™ Select, permitting access to 1,000-plus lounges in over 500 cities for the cardmember plus two guests. What’s more? Cardmembers can access Delta Sky Clubs when flying Delta airlines as well locations of Airspace lounges and Escape Lounges throughout the United States.